Open to: All, detailed results viewable to: All. Participants: 3

Do you feel it is normal for a person who is married to ask to go away overnight with a friend of the opposite sex?

Why did you choose that answer?

macbeaner and I are selling homemade soaps from our Facebook Group Henry Hill Farms Handmade.

Here are some of the pictures!

At my cousin's graduation party my mom was showing me Aunt Diane's fairy garden. It's in a huge rain barrel and has real plants and everything. It looks fantastic. I wanted one.

But, we are still in the process of making the front porch, so I don't really have any place outdoors to keep such a thing. Instead, I decided I'd make a little indoor one, with fake plants. I think it turned out pretty much exactly as I'd planned. 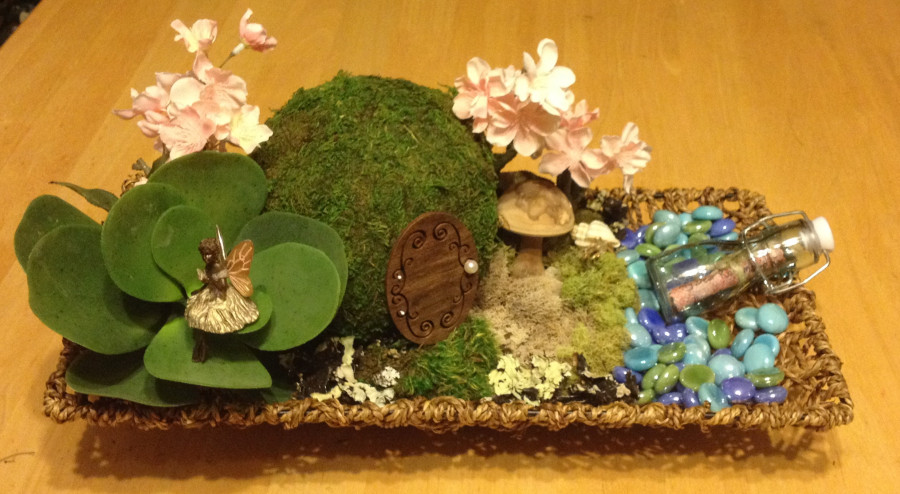 I got most of the stuff at Michael's, though I already had the mushroom and fairy. (Surprised? I thought not!) The door was unfinished, but I already had a furniture stain touch-up marker which was plenty to 'stain' it. The whole project took less than an hour to put together, but turned out pretty cool. Now I just have to figure out where to put it.

While I was at it, I looked for the wicks I wanted to for the candle I want to make...I found a lid that just might work, but no luck on the wick, until I got home. We have a huge spool of it just sitting on top of the fridge. The only thing we don't have are the wick holders.

Introducing Guns of the Range Land, by Larry Payne. This is the sequel to Ride the Savage Land.

Sheriff Jake Hollister had no idea what was about to happen when Samantha Thorn, the new owner of the Bar K, stepped off the Bannock stagecoach. She was the daughter of a Kansas cattle baron and was used to a lot of ranch and a lot of cattle, and she didn't have enough of either. When she and her gunfighter brother, Mac Prescott, pushed an unwilling Ab MacDonald to sell his land, he pushed back. Before it was over Jake Hollister would have to enlist the aid of some old friends to keep them from turning the range land and the streets of Bannock red.

I meant to post this story in its entirety, but only ever posted the first chapter. I will try to post several chapters a week moving forward, until it is complete. Apologies, however, for any typos you may find. I can't take the time to re-edit it just now. I'm supposed to be editing for others today....

When fifteen year-old Hawke feels fed up with not being able to walk, he escapes in his mind to a misty island filled with moorlands, ancient forests, and monolithic stones: a place where he can move and run and accomplish heroic quests.

His life is turned upside down, though, when he's thrust into this dream world and finds it real! He becomes 'Star Catcher.' The job? Track and collect shooting stars or meteors sent from a more advanced civilization, which have powers that protect the island from approaching evil. He finds many helpers along the way: a serving girl who can communicate with animals and create light, an alluring mermaid, a savvy one-eyed crow, and an old farmer with a secret.

Hawke must also discover what's going on inside the imposing mansion called Moon House. Why do rooms change? Why do objects mysteriously shift? Who lives inside the old forest behind the place, and why is the Star Catcher forbidden to enter it? And most importantly, who are Hawke and his stars really battling against? An evil genius? A pirate-like group called the Shrikers who have taken over the island? An Ancient Magic? Or, maybe an aspect of himself?

Introducing:
The Third and Final Installment of the
Azra Pith series!

Several years have passed since the battle in the mountains. Azra's Pith was peaceful and Alexander was in love, but something still didn't seem right. Alexander wondered what had become of Imperius. The dark sorcerer was out there somewhere. Did it still have powers? Was it hunting Alexander? He looked over his shoulder day and night until he realized his worries were consuming him. He made a promise to let go of his fears.

For Alexander timing has always had a sense of irony. On a beautiful, worry-free day, an adventure with the river pirates brings him face to face with Imperius again. The dark sorcerer vanished, taking Sarah, Alexander's love. To find her he will have to travel through the depths of evil and face Imperius once and for all. About to lose the love of his life the same way he lost his mother, Alexander's only hope is a leap of faith and the Butterfly Curse.

My first editing foray into smut is now available.
It's a spicy little mystery with some action, some suspense and some ... er ... action. ;)